One of the greatest satisfactions in our industry (any industry for that matter) is to help solve an issue for a customer.  A trendy word for an issue a customer has is to refer to it as their "Pain".  I tend to think in more positive terms, and consider opportunities to solve issues as a way to help my customer increase their sales revenues and profits.  Lets be honest, this is the reason to be in business, right?  Another term that I don't like is, "what keep the customer up at night?".  I prefer to seek out the answer to why do they get up in the morning?  Maybe the answer is the same but again, I like to think positive.  This leads me to a couple of examples I can share regarding personal experiences I have had with helping a customer solve a sealing concern.  Both examples involved the medical industry and medical devices.

Several years ago, I visited with a upstart medical device company that was developing an automated process for pap smear testing.  The medical device company had contracted an injection molding company to manufacturer and assemble plastic components that were used for the pap smear testing.  The best way to describe the plastic component that utilized a rubber seal is to ask you to visualize a top hat.  Now, I ask that you focus on the brim portion of the hat and flip it up side down so that you are looking inside the hat.  If you will, imagine that there is a "L" shape groove around the inter diameter of the brim.  The groove is where the seal will come into play.

They showed me the o-rings they were using.  Without telling me, I could tell that it was a silicone o-ring.  Next they showed me the "top hat" plastic component and showed me how the o-ring fit into the groove.  Finally they showed me the adhesive that was used to glue the o-ring into the "L" shaped groove.  Ah-ha, this is the opportunity to help them increase their profits!  You see, they began to explain to me that they had to glue the o-ring and that they couldn't automate the process.  They were getting by with the pre-FDA approved volumes but they were very concerned about how to assemble the o-rings when the volumes grew to the millions.  I told them I had a solution and asked them if they wanted to hear my idea?

You see an o-ring would have worked fine if the groove would have had a bottom and two sides.  However, this groove only had two sides and was missing the internal wall that was needed to have a successful o-ring groove.  The o-ring needed to create an (OD) external interference and because of its round cross section, the o-ring didn't have the OD interference that was needed to hold the o-ring into place.  My solution for the customer was to switch to a square precision cut seal that was rectangular in shape and would provide more surface contact with the outer groove wall (e.g. OD interference).   The customer was interested in my solution and together we started the process of developing the perfect thickness (height) for the seal.  Because this process involves extruding a tube and cutting it to length, we were able to provide multiple samples and a minimum cost.  There was zero tooling cost involved with this solution.

After testing a few different thickness, we were able to dial in the perfect thickness.  Our seal worked like a charm and completely eliminated the need for adhesive.  The customer did receive FDA approval and the volume did grow to the millions.  The volume grew so much, that we were loading up a suburban with the back seats down and delivering a full load of seals ( bulk in boxes) several times a month.  It was a great account and the solution brought great satisfaction to my customer and I.  It is moments like this that lets me know I love what I do.

My second story begin with a trade show.  I participated in this show for 3 days and for the most part, the leads had not been very good.  In fact, this particular trade show was on its death bed and the following year it would no longer exist.  It was day 2 of the show and I had taken my lunch break.  A gentleman had sat down beside me and started up a conversation.  He noticed my name tag and asked me if I was familiar with C-Flex.  Apparently, he was at the trade show looking for someone who could supply a C-Flex O-ring.  The truth was I wasn't familiar with C-Flex but I wasn't about to let a lead slip by.  I told the gentleman I would do some research and get back to him.  As it turned out, his office was less that an hour from our office.  I called my friends at Parker and they confirmed they could extrude and splice C-Flex.  I got back in touch with the gentleman I met at the show and scheduled a visit with him.

It turned out the application was for a bone marrow transplant device.  The clinical trials were taking place at a well known University in NC and this device could potential be used to save lives.  This made the project even more satisfying!  We were able to extrude the C-Flex and spliced/vulcanized it into an o-ring.  C-Flex had been chosen by the customer because it had been an approved material for the device.  We ran into a problem with the C-Flex because it turned out it would take a very bad compression set.  Now, we had to go back to the drawing board with our customer.

We'll, as luck would have it, they had tested and the FDA had approved a Dow Silicone material for the device.  We were able to extrude the silicone and added an ID to the round extrusion to give the extrusion/o-ring hollow properties.  The hollow property of the o-ring improved the performance of the seal and the customer was very satisfied.  Not only was the customer satisfied but the gentleman I first met went on to another industry a few years later.   We have remained friends throughout the years.  That was the only time he has been a customer but it is another benefit of my job, gaining great friends!  I'll end by asking that you contact us if we can help solve a solution for you.  Remember, we are interested in how we can work together to create opportunities for greater profits and market share.  We welcome any opportunity to help you!  REQUEST FOR QUOTE 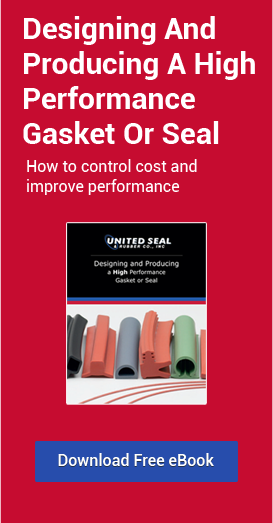